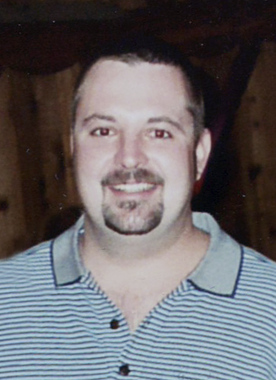 Back to Colin's story

Colin "Toby" Monroe, 43, of Ottumwa, died at 6:10 p.m. January 2, 2020 at MercyOne Des Moines Medical Center.
He was born May 25, 1976 to Wayne C. and Jane Elizabeth Barnhill Monroe. Colin married Ashlie Thompson on February 23, 2002. They had a son, Connor, and later divorced.
A 1994 graduate of Ottumwa High School, Colin earned an Associates degree in Culinary Arts from Indian Hills Community College. Colin worked at Tennyson Enterprises before joining HyVee in Galesburg, IL. He became kitchen manager of the Fairfield HyVee and then a manager at HyVee West Des Moines. He moved back to Ottumwa in 2014 and worked at Indian Hills Community College until the time of his death.
Colin was an avid trapshooter, winning Class D at the State Shoot when he was only 15 years old. He enjoyed fishing in Canada and Minnesota, hunting deer and turkey, and video games. He enjoyed Iowa Hawkeyes basketball and was an avid Chicago Cubs fan.
Left to cherish memories of Colin are his son, Connor of Ottumwa; his parents, Dr. Wayne and Jane Monroe of Ottumwa; a brother, Kerry Monroe of Des Moines; grandmothers, Betty Barnhill of Los Angeles, CA and Jean Barnhill of Oskaloosa; numerous aunts, uncles, cousins and special friend, Jennifer Vandello.
He was preceded in death by grandparents, Dr. Harry and Erma Monroe and grandfather, Robert Barnhill.
Visitation begins at 1 p.m. Monday at Reece Funeral Home. The family will greet friends from 5 p.m. to 7 p.m. Monday. Cremation will follow the visitation.
In lieu of flowers, the family requests memorials be made to Indian Hills Community College Foundation for a scholarship in the Culinary Arts Department to be made in Colin's name.
Published on January 3, 2020
To send flowers to the family of Colin Monroe, please visit Tribute Store.

Send flowers
in memory of Colin

A place to share condolences and memories.
The guestbook expires on April 02, 2020.

My heart goes out to the family. I'm truly sorry for your loss.

Jen Bradley
Toby and I graduated in the same class but I didn't know him very well, unfortunately. Even so, I will miss him giving me a hard time online. He always made me laugh, sometimes at myself. There's no doubt he was a good man who will be missed by many. I'm so sorry for your loss.
Jennifer Studer
Oh Colin, where do I begin? The years we worked together are some of my most favorite times in life. We started out as coworkers and within a few weeks were the best of friends. We shared so much of ours lives together during that time. Seeing Connor grow and even after you moved you made it a point to send me pictures of him. I miss quoting Anchorman and Step Brothers with you. I miss calling you Toby and you calling me Rusty. I miss our funny and sometimes a little mean nicknames we would come up with for people. I’m literally laughing right now thinking of it. You were loved without limits and I will miss you forever. Till we meet again Toby.
Robert, Peter and Jennifer and family

Large Basket Garden was purchased for the family of Colin Monroe by Robert, Peter and Jennifer and family.  Send flowers