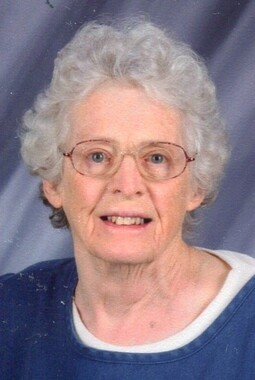 Back to Jean's story

Jean Regina Fogle, 88, of Ottumwa died at 12:37 a.m. December 7, 2019 at Hospice House in Ottumwa.
She was born April 17, 1931 in Ottumwa to Harvey R. and Genevieve R. Sullivan Brouhard. She married Robert Lawrence Fogle on April 27, 1951 in Ottumwa and he preceded her in death February 26, 1979.
A resident of Ottumwa all her life, she was a graduate of Ottumwa High School in 1949.
Jean was a member of Pennsylvania Avenue Free Methodist Church where she was very active in the church. She was part of the foster grandparents program through Ottumwa Community Schools. One of her great joys was spending time with her grandchildren and great-grandchildren.
Surviving are her daughters, Terry (Mike) Reid of Ottumwa, Deborah Fleagle (Lynn Reinmund) of Albia, Connie (Brad) Moore and Lisa (Rob) Reck both of Ottumwa; six grandchildren, Dominique McCormack, Barry (Dani) Moore, Brandie (Brian) McWilliams, Mandi Noll, Hannah (Derek) McIntyre and Sara (Jared) Schelp; ten great- grandchildren, Max, Ava, Bradlie, Gracie, Mya, Sophie, Maddison, Braydie, Connor and Kennedy; and a brother, Byron Brouhard.
She was preceded in death by her infant twin children, Tony and Kathy; two brothers, Jack and Wayne Brouhard; and two sisters, Patricia Flanders and Paula Brouhard.
Her body has been cremated.
Memorial services will be 10:30 a.m. Wednesday at Pennsylvania Avenue Free Methodist Church with Pastor George King officiating. Inurnment will be in Shaul Cemetery.
Visitation with the family present will be one hour prior to the service at the church Wednesday.
In lieu of flowers, memorials may be made to Pennsylvania Avenue Free Methodist Church or Hospice serving Davis and Wapello Counties.
Reece Funeral Home is in charge of arrangements.
Published on December 9, 2019
To plant a tree in memory of Jean Fogle, please visit Tribute Store.

Plant a tree in memory
of Jean

Beautiful in Blue was purchased for the family of Jean Fogle.  Send flowers

Kim Weston
Sending love and prayers for strength to the Family. ~Miss Kim/James School
View all