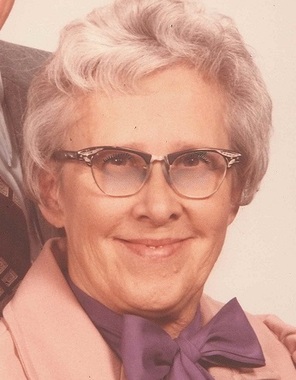 Back to Mary Anne's story

Mary Anne Fine, 99, of Bloomfield, Iowa passed away on December 9, 2019 at the Bloomfield Care Center. She was born January 8, 1920 in Pulaski, Iowa to William I. and Minnie Amstutz Matthews. She taught school prior to her marriage to Dewitt Fine on June 8, 1947. They were married for 61 years until Dewitt's passing on August 22, 2008.

Mary Anne was a homemaker and loved to cook and bake at their farmhouse near West Grove. She especially excelled in baking cookies and each grandchild had their favorite kind. She also enjoyed planting and tending to produce in her garden. Mary Anne worked at the Welcome Center in Bloomfield for several years and was a lifelong member of the Orleans Church of Christ.

She was preceded in death by her parents; husband; granddaughter, Jamie Fine; and sister-in-law, Vivian Matthews.

Funeral services will be at 11:00 a.m. on Friday, December 13, 2019 at the Wagler Funeral Home in Bloomfield with Pastor Jerry Weller officiating. Burial will be at the West Grove Cemetery. Visitation will begin at 9:00 a.m. on Friday with the family present to greet friends from 9:30 a.m. until the time of the service at the funeral home. In lieu of flowers, memorials have been established to the Bloomfield Care Center Activity Fund and the Orleans Church of Christ. Online condolences may be directed to www.waglerfuneralhome.com.
Published on December 10, 2019
To plant a tree in memory of Mary Anne Fine, please visit Tribute Store.

Plant a tree in memory
of Mary Anne

A place to share condolences and memories.
The guestbook expires on March 09, 2020.