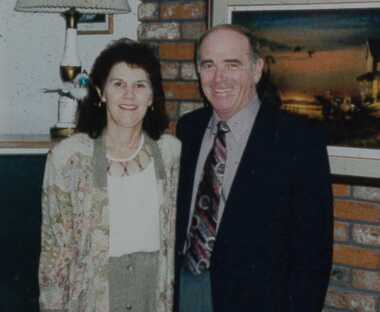 To follow Patrick and Sharon's Story, enter your email.

Back to Patrick and Sharon's story

Joseph Patrick "Pat" Mulhall, age 80, of Las Vegas passed away on October 18, 2019, and Sharon (Argo) Mulhall, age 77, passed away on December 3, 2019 both at the Avenir Memory Care in Summerlin with family by their sides.
Pat was a beloved father, grandfather, husband, community leader, electrical engineer. He was born in Kentucky, spent his formative years in Indiana and New Mexico, and made Las Vegas his home over 50 years ago. He had a long and storied career at the NTS and was a pivotal player in his work assuring that "what needed to go right, always went right." He was dedicated to encouraging others to make their lives better and worked tirelessly in his career, his community and for the UNM Alumni organization. He was a thinker, an innovator and a fixer. If something was broken (you name it), he was always the one to create the solution. He adored his wife of 20 years, was dedicated to his children and spoiled his grandchildren with love and attention. He loved to travel, keep-up on domestic politics, support his Church and Alma mater, and was a devoted Rebels fan. He was instrumental in protecting and improving his neighborhood-as with many other causes he held dear to his heart. He was American to his core and Irish in his soul. He was a truly good and generous man; he will be missed.
Sharon graduated from Moravia High School, class of 1960. She then graduated as a registered nurse in 1963 from St. Joseph School of Nursing in Ottumwa. After working one year at St. Lukes Hospital in Cedar Rapids, she relocated in 1964 to Las Vegas, NV to work at the Nevada Test Site where she met and married her late husband, Andrew Sanchez of thirty years. They had and raised two children Mark and Michelle. She then married her beloved husband, Pat Mullhall. Sharon was truly a living Angel "Nurse"to everyone that was blessed to cross her path. She was a kind and generous person who touched many lives and who will be deeply missed by her loving family and friends.
They are survived by their children (Brian, Glen, Mark and Michelle) and grandchildren (Hunter, Daniel and Isabella). Sharon is also survived by her sister, Nellie Coltrain and brothers, Charles (Jean) Argo, Jim (Jane) Argo, Max (Pat) Argo, Don (DeeAnn) Argo, Rex (Lori) Argo; sister-in-law, Cindy Argo, and several nieces and nephews. Pat is preceded in death by his parents, Charles and Geneva (Drury) Mulhall. Sharon is preceded in death by her parents, Guy and Wilda (Hiatt) Argo, husbands, Andrew Sanchez and Pat Mulhall, and brother Gary Argo.
Celebration of Life Services for Pat and Sharon will be held at 11:00 a.m., Saturday, January 25, 2020 at Sinnott Funeral Home in Albia with Pastor Richard Grimes officiating. Visitation will also be on Saturday from 10:00-11:00 a.m. Memorials may be directed to the Welcome Home Soldier Monument. Online condolences may be left for the family at sinnottfuneralhome.com
Published on January 23, 2020
To plant a tree in memory of Patrick and Sharon Mulhall, please visit Tribute Store.

Plant a tree in memory
of Patrick and Sharon

A place to share condolences and memories.
The guestbook expires on April 21, 2020.