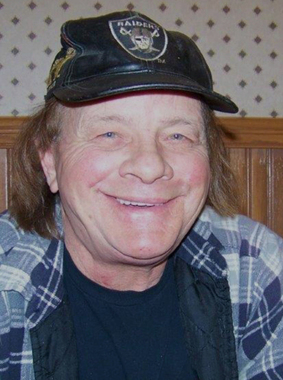 Back to William's story

OTTUMWA - William T. Barnes, 72, of Phoenix, AZ, formerly of Ottumwa, passed away on Friday, May 19, 2017, at home after a battle with cancer. We are rejoicing that Bill is now in heaven with the Lord.
He was born August 15, 1944 in Davenport, IA to W.T. and Beverly Jean Horrigan Barnes. He married Patricia Sue Ann Reinier in 1980, and they later divorced.
Bill was a 1962 graduate of Ottumwa High School. He attended Kemper Military School and was in the U.S. Navy aboard the USS Vega AF-59 in the late 1960's. He loved life and was an avid sports fan. He especially loved the Oakland Raiders, Boston Celtics, and St. Louis Cardinals, and of course had love for Iowa and Iowa State. Much of his time was spent watching these or local sports teams and he could rattle off stats about most any game.
Surviving is his son, Bradley (Noelle) Barnes of Ottumwa; 4 grandchildren, Spencer Barnes, Maiya Barnes, Alexia Barnes, and Thatcher Pierson; a brother, Robert (Darryl Lynn) Barnes of Tempe, AZ; a sister, Beverly (Tom) Drisler of Phoenix, AZ; a niece Brandi Barnes of Tucson, AZ and a nephew Todd Cline of San Diego, CA.
He was preceded in death by his parents.
His body has been cremated.
Memorial Services will be 10:30 a.m. Saturday June 17, 2017 at Northgate Alliance Church with Pastors Jim Eschenbrenner and TJ Callaway officiating. A dinner will be held at the church following the service.
Memorials may be made to the family for his grandchildren's education.
Reece Funeral Home is in charge of arrangements.
Published on May 26, 2017
To plant a tree in memory of William Barnes, please visit Tribute Store.

Plant a tree in memory
of William

A place to share condolences and memories.
The guestbook expires on August 24, 2017.